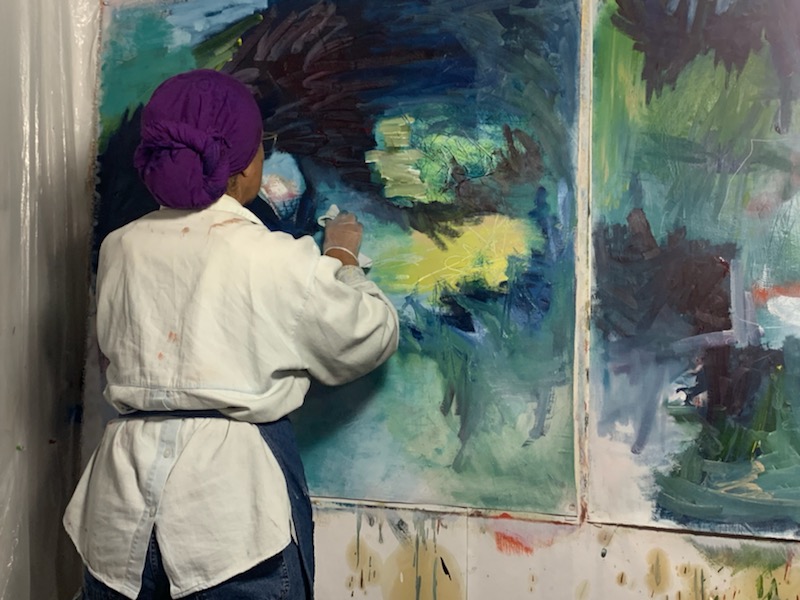 Vivid: What is your art background?

Vivid: What materials do you use?

Ellis: I work with oil, or various forms of acrylic paint, art crayons and sometimes tissue on canvas or fabric.

Vivid: Where do you find your inspiration?

Vivid: Where is the craziest place that you’ve found inspiration?

Ellis: In a Louisiana slave plantation.  The resulting image reflected energies that were passionate/lively as well as dark.

Vivid: Who are some of your favorite artists?

Ellis: I begin by making random marks on the canvas.  As the composition develops, I make adjustments to areas that make me uncomfortable.  The process is repeated layer by layer as I respond with free-sweeping gestures that emanate from Spirit.  This unusual painting method is direct.  It essentially channels spiritual, subconscious and emotional memory into visual form.  Oftentimes, creating a pleasing composition requires turning chaos into order using both additive and subtractive methods.

Vivid: Can you describe a typical day?

Ellis: I typically arrive at my studio late morning or early afternoon.  During lunch, I contemplate the current project: where I am and what needs to change.  Next, I get into a music flow (which depending on my mood can range from straight-ahead jazz, world, house or neo-soul).  Then I get to work.  I’ll work until either the energy slows, or I realize it’s time to get home and start dinner!

Vivid:  What musicians do you listen to?

Vivid: Black or sweet and creamy?

Ellis: Neither! Organic herb tea…(lately raspberry, ginger) straight up or with a little organic honey.

Vivid: Do you have a favorite piece that you’ve created, and if so, what was it and why?

Ellis: Lavender Dance.  A most surprising lavender dancing figure emerged after it took me through many frustrating layers.  I suppose it really wanted to Be…

Ellis: Scorpio sun (with Libra Moon and  Libra Venus…  I’m grateful for those two aspects that help balance the intensity!)

Vivid: If you could invite anyone (living or dead) to dinner, who would it be?

Vivid: Tell us three words that describe you.